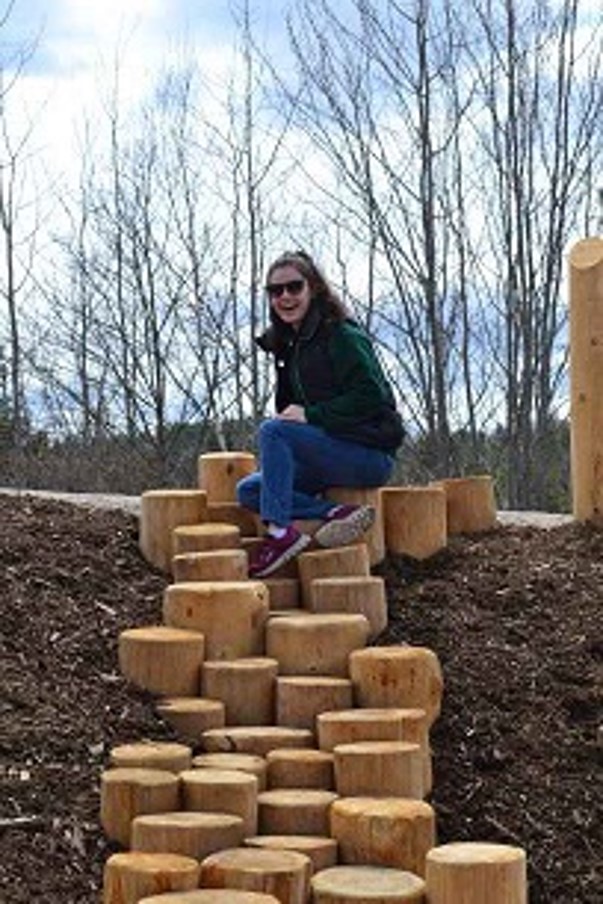 Hello, my name is Jenna Nauss and I am entering my fourth-year majoring in Biology at Acadia University! I am very excited to have the opportunity to work with Dr. Russell Easy for my honours research. My project will focus on investigating the physiological effects of mercury contamination in Striped Bass, Morone saxatilis, using traditional and modern molecular methods. Striped Bass are primary consumers which places them at the top of the food chain and can result in bioaccumulation of mercury and other contaminants. It is well known that human consumption of striped bass containing high mercury levels can cause neurological effects. Bioaccumulation of mercury can lead to severe neurophysiological disturbances in animals and is able to cross the blood brain barrier. My goal for this project is to target genes including those that transcribe for enzymes involved in biological pathways used by fish to detoxify tissues in response to contaminants. Using tissue and mucus samples from local fishers the concentration of mercury in various tissues will be measured to determine locations where mercury is accumulating. Using this information, I hope to identify the pathways that are affected from mercury exposure and provide more information regarding how fish process heavy metal contaminants.

Hello! My name is Melanie Smith and I am going into my fourth year as a biology major at Acadia University. My honours project involves the endocannabinoid system which is a multifunctional biological signalling system with many parts including neurotransmitters, receptors, enzymes, and transporters in the central and peripheral nervous system of mammals (including humans), and other vertebrates. Receptors activated by endogenous ligand anandamide and 2-AG (two major endocannabinoids) are also activated by compounds extracted from cannabis. Cannabis is known as an exogenous ligand and interacts with cannabinoid receptors of the endocannabinoid system, causing symptoms such as relaxation, euphoria, decreased short term memory, impaired motor skills, and more. The project is to examine how stress affects enzyme activity and enzymatic pathways involved in ligand binding which can lead to physiological changes in the zebrafish model. Zebrafish are used as the model organism due to the similarities in their genetic structure to humans. By conducting a quantitative and qualitative assessment of protein activity in response to endogenous cannabinoid ligand binding and exploring changes in activity in zebrafish following stress, the role the endocannabinoid system plays in neuroprotection, neural proliferation, inflammation, and development will become further understood.

Hello, my name is Sydney Tonner and I am heading into my fourth year at Acadia University majoring in Biology! I am very excited to begin my honours research with Dr. Russell Easy. My honours project will be based on Bon Portage Island, just off the south shore of Nova Scotia. I will be exploring stress biomarkers in the Leach’s Storm Petrel, Oceanodroma leucorhoa, using primarily proteomic techniques. The Leach’s Storm Petrel is a small migratory bird whose status has been recently changed to “vulnerable” by the International Union for Conservation of Nature. Traditionally, the stress response in avian models has been measured by blood levels of cortisol. However, as a steroid hormone, cortisol is also released due to various other physiological events and is not reliable to solely measure stress. This project aims to explore how other biomarkers in storm petrel blood change throughout the nesting season. This work could also identify specific stressors and the extent of stress petrel colonies experience while on Bon Portage Island. The protein biomarkers identified will be correlated with environmental stressors, such as temperature and pH, and physiological factors, such as size and age. I will also be exploring the differential gene regulation of nucleic acid sequences involved in the synthesis of Petrel protein biomarkers. With the information gathered from this research, I hope to identify a more reliable biomarker that accurately assesses the stress response in the Leach’s Storm Petrel which may also allow for a better understanding into the health and survival of this species.

Hello, Y'all! My name is Zhe (A.k.a Jackson) and I have completed my Bachelor of Science in Biology at Acadia. In the past year, I was working with Dr. Trevor Avery as a Research student on Striped Bass (Morone saxatilis) diets analysis using observation study and R programming language. 2018 summer, I was also working on Avon River project and attended fishing tournament. Striped Bass was collected from the Avon River and also donated by talented anglers. Luckily the research topic got extended to a master project which brings the diet analysis to the next level— DNA barcoding, and the project under the supervision of Dr. Russell Easy and Dr. Trevor Avery. My master project with a focus on Identifying prey items in the stomach “goo-soup” and quantifying how many percentages of each species in Striped Bass diet. Extract the DNA from the Soup then using species-specific primers to target species throughout Real-time PCR. With the success of this project, it will provide a non-bias diet analysis method.

Hello. My Masters projects begins with my love for turtles. I’ve been volunteering and working with Blanding’s Turtles for more than half my life and seems fitting I would have the opportunity to continue working with them during my Masters project. To my delight a new group of Blanding’s Turtles was discovered. As a Master student I will be working under Steve Mockford and Russell Easy to genetically compare these new turtles to the Kejimkujik National Park and Historic Site, McGowan lake, and Pleasant River populations. I am learning many new techniques, like DNA extraction and Polymerase Chain Reaction (PCR). While completing my undergraduate here at Acadia University I learned about these processes but didn’t have the chance to try it myself, so this has been such a great opportunity to learn and grow as a Biologist. I hope that the research I do can help the Blanding’s Turtles by providing information about their genetic stability."